Ion channels control fundamental life processes. Defects in their function play a major role in many diseases. Their importance as targets for production of new drugs is continuously increasing. The patch clamp method of Sakmann and Neher, a technology which enables the examination of individual ion channels, was honored with a Nobel Prize and has resulted in the foundation of molecular electrophysiology as a recognized science.

The rapid transfer of signals between nerve and muscle cells occurs through the alteration of the electrical potential of the cell membrane. The potential is altered by sodium, potassium, calcium or chloride ions, which establish a gradient across the cell membrane, passing through the membrane. At the beginning of the 1970s, research, particularly that of Bernard Katz and Ricardo Miledi at the University College London, led to the general assumption that discrete pore-like ion channels were integral parts of the electrical conductibility of biological membranes. However, there was no direct evidence for the actual existence of such ion channels.

Current flow through the individual ion channels in a muscle fiber. From B. Sakmann: Nobel Lecture, December 9, 1992.

Only after Erwin Neher and Bert Sakmann developed the “patch clamp method” was the existence of ion channels ever proven. With this method, the ionic current is measured on a tiny membrane patch to which a predetermined voltage-clamp is applied. This patch is only a few square micrometers in size and contains a single ion channel. When the current is measured, abrupt, short-term jolts can be observed: The channel opens, ions flow through it and transfer electrical charges from one side of the membrane to the other. Then the channel closes again. Currents of a few pico Ampere (billionth Ampere) can be measured within as little as one millisecond. An extremely sensitive experimental set-up is required for doing so.

After numerous futile experiments and constant improvements, Neher and Sakmann finally succeeded in 1976 to measure the ionic current of single channels in the cell membrane of a muscle fiber. The patch clamp measurement apparatus used to provide evidence of the existence of ion channels was developed at the Max Planck Institute for Biophysical Chemistry in Göttingen and can today be viewed in the German Museum in Bonn. This experimental set-up led to the foundation of molecular electrophysiology as a recognized science. 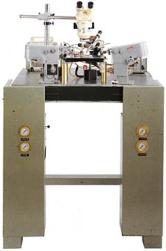 Patch clamp apparatus with which Sakmann and Neher were able to measure the ionic current through single membrane channels in 1976. Source: German Museum, Bonn.

The principle of the method is very easy – as are many ingenious innovations. A glass pipette with a tip diameter of only one thousandth millimeter is pressed gently on the cell membrane. Vacuum leads to a gigaseal between pipette wall and membrane ("on cell" configuration), so that the ion channels below the opening of the pipette tip are the only connection between the inner side of the cell and the electrode fluid in the pipette. When suction is applied to the pipette or a short-time voltage-clamp is applied, the membrane breaks and the cytoplasm and the pipette solution start to mix ("whole cell" configuration). Withdrawing the pipette will excise a patch ("excised patch" configuration) which can then be analyzed.

This biophysical method made it possible to exactly determine when a single ion channel opened or closed. In combination with biochemical and molecular biological methods, the molecular composition of ion channels, the changes in configuration upon opening and closing and their specificity towards certain ions and chemical transmitter substances can be analyzed. Today, thousands of laboratories use the patch clamp method in order to examine ion channels in animal and plant tissues and cells. Life processes such as the fertilization of an egg cell, the uptake of nutrients by plant cells, insulin release by the pancreas, heart muscle contraction and the signal transfer in neurons depend on ion channels.

Already at the beginning of his career in the research laboratory of Bernard Katz, Sakmann was interested in the function of the central nervous system. Together with Tomoyuki Takahashi, Sakmann developed a method to expose neurons in brain slices, so that patch clamp techniques could be applied to measure synaptic currents. In order to investigate the elementary processes of synaptic signal transmission in close cooperation with molecular biologists, Sakmann moved his laboratory from Göttingen, where he had been collaborating with Erwin Neher for sixteen years, to Heidelberg, one of the best molecular biology centers in Germany. In Heidelberg, Sakmann founded the Department of Cell Physiology at the Max Planck Institute for Medical Research in 1989. 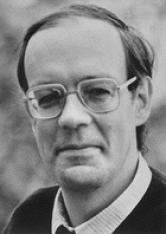 Two years later Sakmann was awarded the Nobel Prize of Physiology or Medicine together with Neher. When Sakmann joined the Max Planck Institute in Heidelberg, the institute began to reorient itself and focus on the molecular and cellular basis of life. This research was further strengthened when molecular and neurobiologist Peter Seeburg joined the institute in 1996. The cooperation of the two research groups on the clarification of the physiological and pathological functions of the synapses of the central nervous system on the molecular level using biophysical and molecular biological methods turned the listed red brick building into a leading international center of molecular neurobiology. 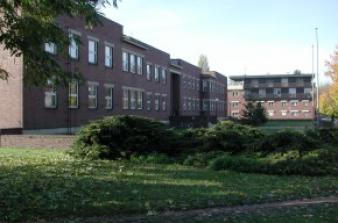 Ion channels as the targets for the production drugs

The sales volume of drugs which specifically target ion channels currently amounts to approximately six billion US$. According to the FDA, the number of newly approved drugs which target ion channels, is as least as high as the number of drugs targeting proteases, polymerases or reverse transcriptases. Among the 100 drugs with the highest sales volume 12 interfere with ion channels. In comparison with other drug target classes such as the G protein coupled receptors or kinases, ion channels have so far only constituted a minor focus of therapy.

This will certainly change. In particular the progress in transcription profiling made after the human genome has been sequenced, has provided new insights into the tissue specificity of ion channels. The combination of patch clamping with new methods such as “molecular targeting imaging” and 3D microscopy will certainly increase the importance of ion channels for medical research and application. As shown at the 2nd International Conference on Ion Channels in Drug Discovery & Development on 24 and 25 October 2004 in Princeton, NJ, the pharmaceutical industry is intensively investing in ion channel research. The major focus is put on diseases such as asthma, inflammations, myocardial arrhythmia and diseases of the nervous system such as epilepsy and depression.