The Buzz Over Electric Wrinkle Remover 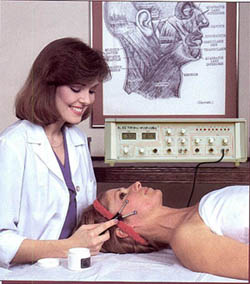 For about eight years, the Electro- Acuscope, a device the size of a large briefcase that emits a low-level electrical current, has been quietly used by physical therapists, acupuncturists, M.D.'s and other health professionals largely to treat pain and athletic injuries.

But recently, Los Angeles medical doctors, acupuncturists, cosmetologists and physical therapists report they are seeing growing numbers of clients, including more than a few celebrities, who ask for facial treatments with the Renaissance, which is distributed by the same company as the Electro-Acuscope. The treatments which are frequently billed as "electrical facials" are solutions to the physical effects of aging, and practitioners are recommending the procedures for both facial rejuvenation and overall health benefits.

Several times a week, actress Cloris Leachman, travels to Laurel Canyon for such treatment, which she claims reduces her wrinkles, increases calmness and boosts her energy so dramatically that her major problem is "suffering frorn over-thrill." Typically, Leachman is treated at her physical therapist's office with one of three similar machines: the Electro-Acuscope, the Myopulse or the Renaissance, which was developed specifically for the face. Whatever device is used, two probes are generally placed at various points on the client's skin. As Los Angeles acupuncturist, Steven Rosenblatt explains the process, 'All of our bodily processes are based on electrical activity.

"These instruments read information from electrical points on a patient's skin," says Rosenblatt, who was the first staff acupuncturist at the UCLA School Of Medicine and tested all three instruments before the FDA labeled them in 1983. "The machine gets the information and gives a numerical value to it. Then it corrects the body's 'short circuits' by feeding electricity back in if it's needed. By emitting the proper amount of low-level electrical current though the probes, the machine corrects electrical imbalances, and stimulates the body's healing properties."

One of the effects, Rosenblatt adds, is that stimulating nerves in the face causes capillaries to expand, increasing blood circulation to the area, carrying more oxygen to surrounding tissues that speeds the elimination of toxins, making the skin look better and promoting healing if there is inflammation.

Leachman says she feels no pain in her sessions, only a mild tingling sensation if that. In fact, the star of television's "Facts of Life" insists she has such a good time during the treatments that "we laugh so hard in there that they pound on the walls." "People tell me I look 10 to 15 years younger, maybe even 11 to 16 years younger and I myself don't feel so bad," Leachman exults. The 61-year-old actress best known as Mary Tyler Moore's next door neighbor, Phyllis, says she has had two to three treatments a week for the last four months, mostly to achieve an overall sense of well being. But Leachman is not discounting the cosmetic effect of the treatments.

Leachman now owns two machines (The Electro-Acuscope and the Renaissance machine) and says she's considering investing in the Myopulse as well. Actress Susan Blakely, and ber husband, producer Steve Jaffe, say they lease an Electro-Acuscope and use it regularly for deep relaxation and muscle regeneration. And 60-year-old hair care expert at Vidal Sassoon is considering purchasing a device; he says he's been treated with the Electro-Acuscope repeatedly by his physician for "pulled shoulder muscles and anything for an arthritic nature" as often as every other day when he's in pain. All three instruments are distributed by Sectro-Medical, Inc., in Fountain Valley. According to founder, Jerry Fisher, over 5,000 of the devices have been sold around the world since they went on the market in 1979.

Though the American Medical Assn. has not evaluated the Electro-Acuscope or other similar machines, an AMA spokesperson says the devices are considered safe and effective. A 1984 report prepared by Ernest Feigenbaum, MD, for the U.S. Office of Health Technology Assessment (a division of the Public Health Service) states, Electrical stimulation instruments are considered a safe and effective method for controlling pain and reducing the use of narcotic analgesics. It is widely accepted for this use." Santa Monica acupuncturist, Margot Jordan, says numerous health professionals, herself included, have witnessed the side effect of facial rejuvenation in the course of treating pain and have experimented with the devices for the precise purpose of increasing relaxation- and softening wrinkles. Jordan has been so impressed with the results that her practice is now devoted exclusively to rejuvenation procedures and she prefers the Renaissance Instrument to acupuncture needles.

There's a remarkable energizing effect- But the [facial] treatments do have to be repeated," advises Dr. Pearl McBroom, a Marina del Rey cardiologist/internist who uses the Electro-Acuscope and the Myopulse for medical treatment of diseases from shingles to herpes and also employs a cosmetologist to provide facials with the Renaissance. For facial treatment, McBroom and her cosmetologist usually recommend that a client have a dozen sessions over a period of a few weeks and then be treated for maintenance "at lease twice a month." Prices are $65 for a one- hour session and $100 for an I 1/2-hour treatment. McBroom's treatment schedule and price scale are typical of those at offices of other health professionals in the Los Angeles area. All facialists and other practitioners offering rejuvenation treatments interviewed by The Times agreed that regular maintenance sessions are necessary to maintain the reduced- wrinkle effect While many claim that wrinkles typically soften, they may not always be fully erased. In addition, practitioners point out that treatments with the machine cannot create facial restructuring in the manner that p1mic surgery can.

The Renaissance machine and its treatment is by no means a substitute for plastic surgery. We use it more as an adjunct," McBroom emphasizes, adding that her patients are also counseled on nutrition, exercise and stress reduction in addition to receiving medical diagnoses and treatment In the event the patient does need cosmetic surgery, we use the Renaissance immediately after surgery to enhance healing. The patient can be fully recovered in half the usual time.

McBroom recalls that she was given a Electro-Acuscope in 1980 by a fellow physician who'd purchased it but was "too involved in other research to use it. I was amazed to find many aches and pains were alleviated in a short period. Since then, I've used it on hundreds of patients." Dr. Valentine Birds, a North Hollywood internist, also works with the Electro-Acuscope and Myopulse instruments for medical purposes. A supervised nursing assistant gives facial treatments in his office with the Renaissance machine.

"I had used the Electro-Acuscope for muscle spasm and found that facial improvement to be a side effect be says. 'My theory is that if it won't hurt the patients and it can help them, I'm willing to use it. It's one thing to treat the disease and another to normalize the physiology and make the person healthy, which the machines help the body to do. 'I'm not satisfied with only diagnosing and treating the disease. I'd rather improve the basic physiology, that way you don't have the disease problem. If you feel good, you're going to look good. And if you're hurting, it's going to show up in the face".